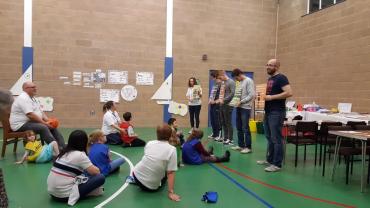 Our first task, at Ballygomartin was to take the Sunday morning and evening services. Despite some nerves, both services went well - there was a clear theme of thankfulness for God’s faithful love throughout.
Monday began with devotions - Olly (Roebuck), our team leader, encouraged us with the account of how, in spite of his fears, Ananias was used to restore Saul - (Acts 9:10-19). Later, we joined the women of ‘The War Room’ prayer group. We were amazed by their determination to commit everything to God in prayer, their faith to see those prayers answered and their fearlessness in opening up to one another - praying and weeping as one. We had an excellent reception in Ballymurphy as we went door-to-door.
Taking RE classes in Carr’s Glen Primary School was another highlight. Despite being restricted in what we said, the children were hungry to know about God. This was epitomised by the final question of the day from a little girl: ‘Where can we find all these stories?’
We met a wonderful brother in Christ, Wilson Martin, in Cairnmartin Care Home. Wilson, a keen theologian prayed earnestly for the Church to come into the Home and Ballygomartin was the answer.
On Thursday, the team went to Glencairn Care Home. Despite a less than welcome reception, God moved and even the carers ended up smiling and praising God. A man named Eric, convicted of his sin and his need of Christ’s sacrifice, put his faith in the Lord Jesus. God’s hand is not shortened that he cannot save, and despite our frailties, he builds his church. Glory to him.
Back to News