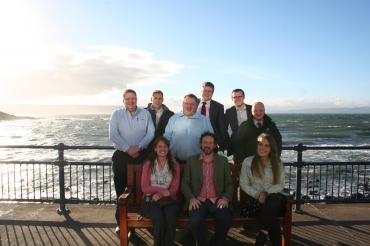 A team of nine students from the college made their way to Coleraine for a week of ministry alongside the church during October. The experience of doing street-work was new to some but it enabled many contacts to be made, that will hopefully result in people, who are looking for a spiritual home, visiting the church. A significant number of Polish workers and students from Hong Kong attend the church weekly, giving it an international feel.

We took services in three homes for the elderly, and on Tuesday, one of the team had the privilege of leading a woman to the Lord, making every effort more than worthwhile. We also visited three primary schools to take part in their assemblies. Another real highlight of the week was the apologetic theme used in RE classes in three secondary schools. On Friday night (26 October), two evangelism events were held concurrently – a desserts and jazz night for adults and a discussion and acoustics night in Ground Café for the more youthful.

On Tuesday evening, after midnight, something different was planned. We were given an address and arrived on a dark, suburban street, with little street lighting, to what we thought was the correct house. There was what could probably best be described as a house party in progress. Some of the team went next door and were greeted with a sign ‘Doorbell broken. Please knock’.

When our attempts to knock for attention failed, we gingerly opened the front door, aware of the bizarre nature of what we were doing. As we made our way through the door, we were relieved to find 35 young people, praising God to the sound of a single guitar. This was the Christian Union from the University of Ulster and we were joining them for outreach outside a popular student bar in Portstewart.

The wind was howling from the tail end of a hurricane; so the soup and tea served from the boot of a car were most welcome to many. Some fruitful conversations developed about important spiritual matters. This was not a one-off event. The Christians have a very strong name and witness among the students. Please pray for them, as they show the love of Christ long after many of us have drifted off to sleep.

We thank Richard Blayney and the Coleraine Church for all their efforts, hospitality and organisation.

(Written by Richard McCord and published in abci insight magazine)